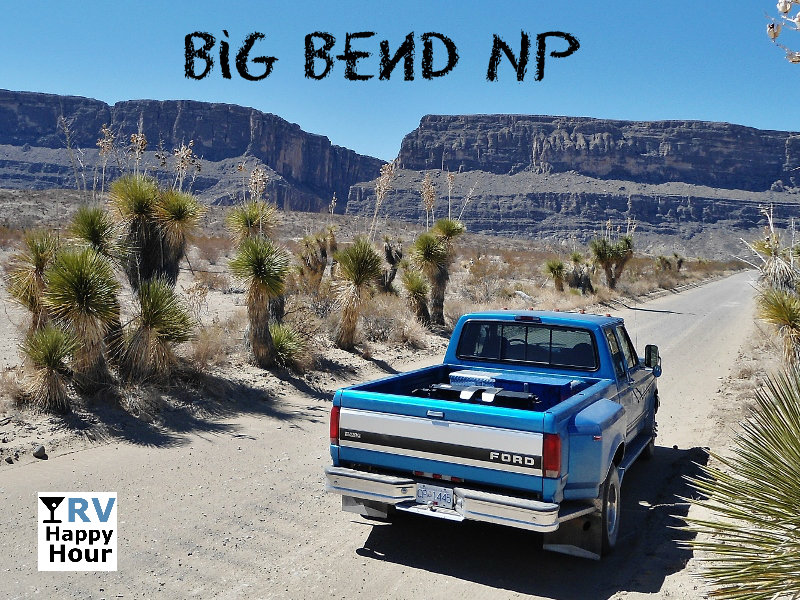 There are beasts that lurk in the scrub bushes of Big Bend National Park that can cause a grown man to run away like a little girl. I am that man and this is my story.

We ventured down to do some RVing in Big Bend NP in the spring of 2012. We had read it was this amazing expanse of wild Chihuahua Desert in south west Texas. It was said to be remote, rugged and beautiful, a terrific place to capture some gorgeous photographs. Driving into the park we were greeted with scenic vista after scenic vista and got really excited about the photographic and hiking opportunities this park would have. You would think in such a hot, dry and desolate environment there would be little to no wildlife. To the contrary the desert had a surprising assortment of life forms. Insects of course but there were also a large assortment of rodents including some super-fast jackrabbits with giant ears. As we drove along at night they would race out and flash by just in front of the truck freaking the crap out of us!

There was also a large contingent of coyotes that would gather every evening just outside the campground and bay, yip and holler like crazy dogs. My wife Anne loved there calls. Needless to say though we kept our beagles close to the rig and didn’t do much late night dog walks. I felt like I was in a Warner Bros cartoon. We had the Bugs Bunny, Wiley Coyote and hanging around the parking lot was the Road Runner. Beep! Beep!

These were all very amusing critters but there was one more roaming Big Bend that I had never encountered before called Javelina! Cue the high pitched scream for effect.

Peccaries (Javelina) are omnivores, and will eat small animals, although their preferred foods consist of roots, grasses, seeds, fruit, and cacti—particularly prickly pear.Pigs and peccaries can be differentiated by the shape of the canine tooth, or tusk. In European pigs, the tusk is long and curves around on itself, whereas in peccaries, the tusk is short and straight. The jaws and tusks of peccaries are adapted for crushing hard seeds and slicing into plant roots, and they also use their tusks for defending against predators.

By rubbing the tusks together, they can make a chattering noise that warns potential predators not to get too close. In recent years in northwestern Bolivia near Madidi National Park, large groups of peccaries have been reported to have seriously injured or killed people – http://en.wikipedia.org/wiki/Peccary

We heard tell of these little pig like beasts as we had moseyed our way across Texas. Consensus was to leave them alone and give them a wide berth, especially if they have youngins. We saw a few on our drive and they were quite the ugly looking little dudes. I didn’t become real leery of them until I saw what they could do to a dog. One of the RVers in the park had been running with her dog and out of the scrub charge javelina, attacked them and one put a nasty gash in the poor dog’s side. The javelina have pointed tusks protruding from their mouths and use them to rip open an animal’s loins. This was confirmed by a local vet in the nearby town of Terlingua. We had one of our beagles in to get looked at for a coughing issue and the vet told us he regularly treats doggie victims of the javelina.

It was a beautiful sunny spring day in Big Bend National Park and we had spent the cool morning hiking and photographing the countryside. Along the road back to the Rio Grande Village campground there is an old watering hole called Dugout Wells, just off the highway. Because there is an old well and spring here some trees grow and makes for a little oasis in the harsh desert. The park has setup a few picnic tables and we thought this would be a nice place for a picnic lunch.

Anne and I grabbed a table and commenced to chow down on some yummy PB and J sandwiches when we noticed a clicking sound in the bushes. How odd we thought to ourselves. What could that be? Maybe it was a strange insect? Anne decided to walk a ways down the path and check it out. She got a several yards away when it dawned on me. Javelina click their tusks as a warning to intruders! Just as I yelled to Anne to get away we heard the nastiest sounding growling and grunting I think I’ve ever heard an animal make. That backed Anne up immediately and we both slowly started to pack up our lunch and head for the truck. A few steps on that journey bushes began to shake violently, the Javelina were charging us!! It was scary. You couldn’t see them but I knew they were coming fast sounding like little balls of hate. I’d like to say I was a hero and stood and protected my woman but the real truth is I was first back to the vehicle. Luckily the javelina never left the bush.

We ate the rest of our lunch huddle in the safety of the truck. While we ate a young family showed up and we warned them that there was an angry pack of Javelina. I guess ignorance is bliss because rather than heed our warning they all set out to try and flush out the javelina. You see that a lot in National Parks. People have no concept of what a cornered wild animal can do to them or their little children.

Well that’s my Javelina story. I have since seen one up close at the Living Desert Zoo in Palm Springs and I’m happy they didn’t catch us. Anyone else got a javelina story?

20 thoughts on “Wildlife Encounters While RVing in Big Bend NP”